A study on stage directions as means of control and written media as the object of portrayal in contemporary drama.

Serge Honegger's work addresses the control of actions through language and writing. The work takes as its subject four dramas by John von Düffel, Peter Handke and Franz Xaver Kroetz.

The discussion intends to highlight directional practices’ fundamental dependence on language. If the controlling action is evident in texts, the difficulties of com-prehension are accentuated by writing as the communications channel. The strength and weakness of ‹text› as a tool for direction lies in the fact that alternative readings, interpretations and unpredictable conclusions are to be expected. 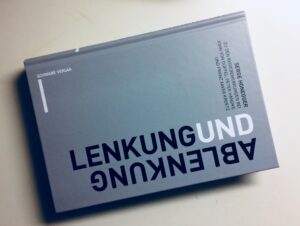 The dramas selected mainly consist of stage directions. They emphasise the fact that a theatrical event consists not only of prescribed speeches, but also of multiple non-linguistic phenomena. Readers only perceive these, though, when they are elevated into words. The four dramas give priority to polysemous phenomena and linguistic games. The way they are conveyed increases, rather than reduces complexity. This direction tool is capable of creating plot options by challenging the reader to make interpretative decisions and thereby rousing them to act.

"Lenkung und Ablenkung" is available at the Schwabe Verlag
Order on Amazon
Our article for the University of St.Gallen to mark the award of the Nobel Prize to Peter Handke

We are collecting visitor data through Google Analytics.